Those who are serious about making Wi-Fi work properly, must become students of the 802.11 standard. No matter how hardware manufacturers rebrand the features and services of Wi-Fi as something they invented, all critical interactions between Wi-Fi STAs are blueprinted by the carefully worded clauses that compose the 802.11 standard. Since that standard is frequently changing, so too, must the Wi-Fi practitioner continue to study and grow.

The 802.11 Working Group (WG) is a subset of the IEEE 802 LAN/MAN Standards Committee’s, Standards Association (SA). The individual amendments to the main standard are the results of the work performed within the IEEE 802.11 brainstorming committees known as Task Groups (TG). When the Task Group is created it is assigned a sequential letter designation, such as “TGax” and then the mind melding begins. During this time many ideas, concepts, and technologies may be considered, discarded, and sometimes agreed to.

Once the Task Group has completed its deliberations, the result is offered for comment and approval to various interested groups within the 802.11 Working Group. Following that it is forwarded to the IEEE Standards Association (SA), Standards Review Committee (RevCom) for final approval and release.

At this point it is considered part of the 802.11 standard but until it is actually interleaved into the existing text and republished it remains a free standing document. Republishing the full 802.11 standard, which we’ll refer to as a “roll-up”, is a complicated procedure that is only performed every few years. The previous roll-up before “IEEE STD 802.11-2016” was titled, “IEEE STD 802.11-2012”, and the one before that was “IEEE 802.11-2007”. The amendments that were completed in time to be included in the 802.11-2016 roll-up came from seven Task Groups, which are shown in the chart below. To see the full history and future of the 802.11 Task Groups check out: http://grouper.ieee.org/groups/802/11/Reports/802.11_Timelines.htm

Since the IEEE 802 LAN/MAN committee has taken the responsibility for creating standardized networking protocols for Layer 2 and Layer 1 of the OSI reference model we generally refer to the amendments created by the 802.11 Task Groups as being a “MAC” or “PHY” amendment. However, many of these enhancements affect both Layer 1 and Layer 2.

In this upcoming series of articles, I will provide an introduction into each of the fundamental amendments that were added to create the current IEEE 802.11-2016 standard document. Keep in mind that, while not every new amendment achieves wide popularity, each one does add new capabilities to the overall body of features available to the technology. In addition, while not every feature in every amendment becomes certified by the Wi-Fi Alliance or implemented in shipping products, often these overlooked features create new options in later releases.

IEEE 802.11-2016 was published in December of 2016 as the result of several amendments forwarded to the maintenance committee known as 802.11REVmc. Among those amendments were a combination of PHY- and MAC-based enhancements to the standard. In this first installment we will explore the 802.11ad-2012 amendment which provides a multi-gigabit PHY protocol that operates in the widely available, unlicensed, 60 GHz frequency ranges.

“IEEE 802.11ad is an amendment to the 802.11 WLAN standard which enables up to 7 Gbps data rates in the unlicensed and globally available 60 GHz band. With much more spectrum available than the 2.4 GHz and 5 GHz bands, the 60 GHz band has wider channels, enabling higher data rates over short distances (1m – 10m). Primary 802.11ad applications will be to remove wires between High-Definition multimedia, computer displays, I/O and peripheral, peer to peer data synchronization and higher speed LAN.” – Agilent Technologies

As stated above 802.11ad is very fast and operates in the 60 GHz frequency range, known as the millimeter (mm) wave band. Our everyday channels in the 2.4 and 5 GHz frequency ranges exist in the so-called microwave band. Because the frequencies used by 802.11ad are very short, they display characteristics similar to light waves and optical networking technologies. This means that they tend to propagate according to Line-of-Sight (visual) principles. In other words, you should not expect much wall penetration from 60 GHz carriers. At first take that may seem like a detriment, but as we have learned over the years, intrinsically small cells allow for much higher AP and user density, due to improved channel reuse (spatial multiplexing). 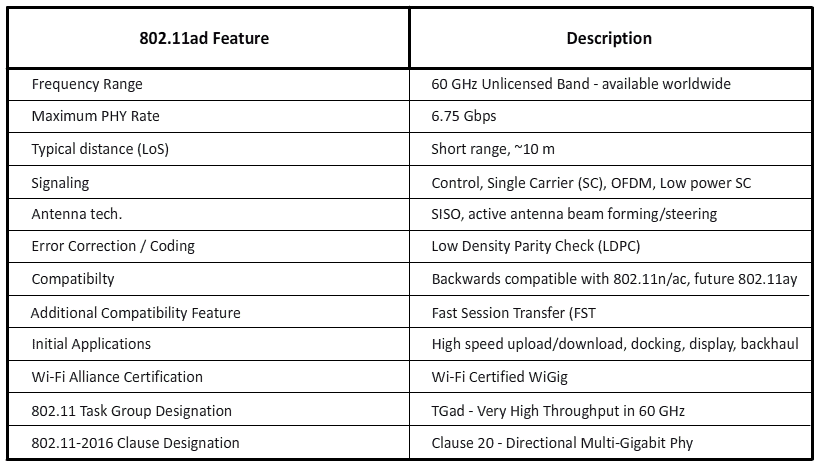 Another improvement to help with AP density is the ability to utilize pinpoint beam forming/steering through the use of as many as 32 co-located antennas. This will, in many cases, allow nearby APs to share the same channels, with a minimum of co-channel interference since the beams can be steered away from each other. The reason that it’s possible to mount so many antenna elements in such a small area is specifically due to the very short 60 GHz wavelength. Remember, antenna dimensions are related directly to the wavelength(s) they operate on. While 802.11ad makes use of active antenna arrays, it’s important to realize that these are used for beam forming only, not Multiple Input/Multiple Output (MIMO). All 802.11ad is Single Input/Single Output (SISO). 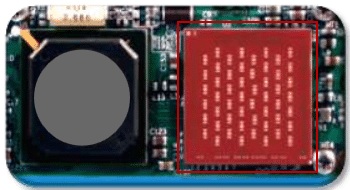 The frequency range available for 802.11ad is vast compared to 2.4 GHz or 5 GHz allocations. For 802.11ad, in the U.S. there is 7 GHz of raw frequency space while in much of Europe there is 9 GHz available. In networking, channel bandwidth is the prime consideration, and 802.11ad uses ultra-wideband channels, 2.16 GHz wide. Compare this to the 802.11ac bonded channels of 40, 80, and 160 MHz. One normal 802.11ad channel contains bandwidth equivalent to 108 standard, 20 MHz wide OFDM channels. The FCC unlicensed 60 GHz frequency allocation will allow 3 concurrent, non-overlapping, 802.11ad channels. 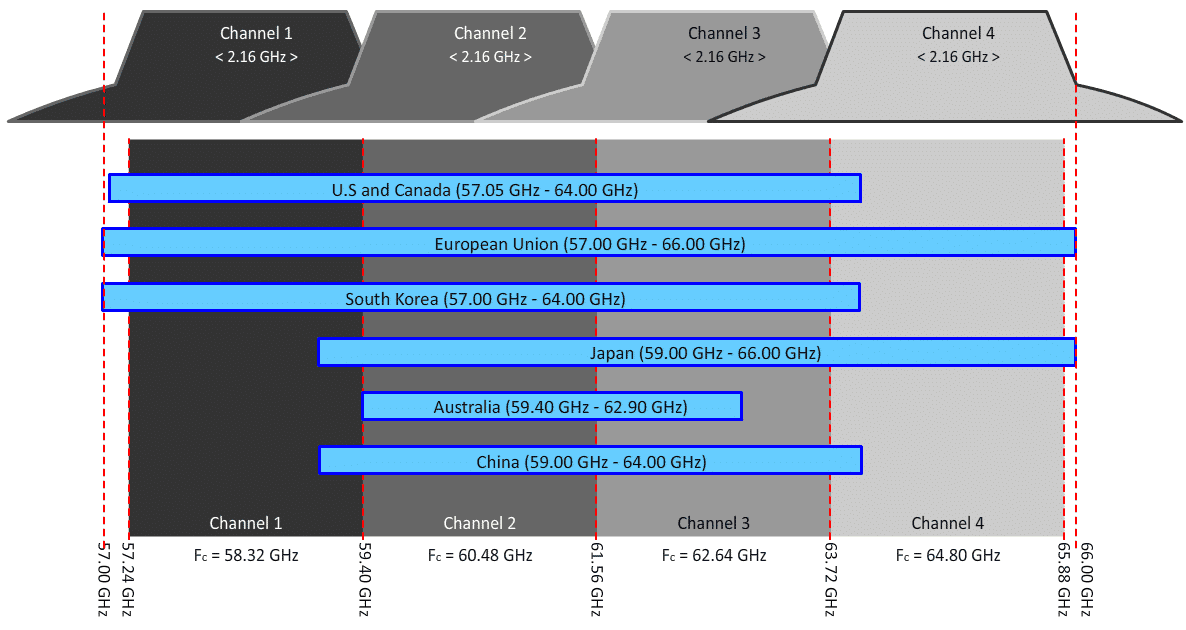 802.11ad provides two multiplexing technologies with 32 standard modulation and coding scheme levels. The following composite tables have been created and included for use when designing 802.11ad Basic Service Areas (BSA). 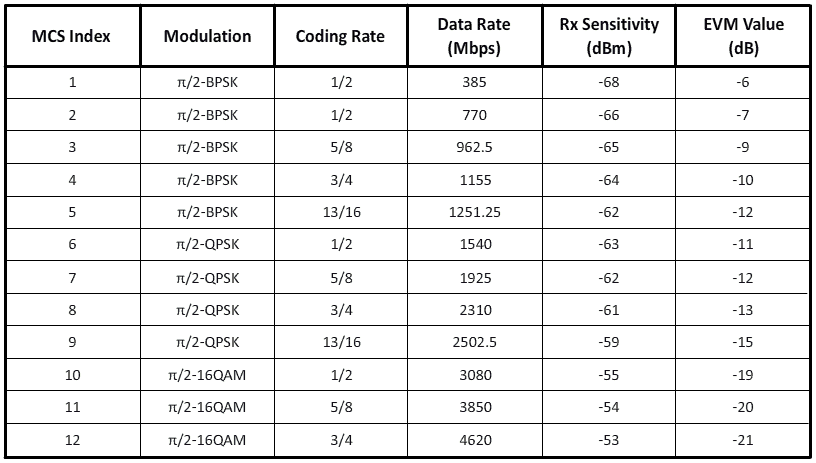 MCS levels 13 – 24 are based on OFDM, using SQPSK, QPSK, 16QAM and 64 QAM modulations. 802.11ad provides additional error-correction through the use of coding, convolutional or LDPC. The combination of OFDM modulation and convolutional coding rates result in PHY rates of 693 Mbps (MCS 13) to 6756.75 Mbps (MCS 24). The baseline Receive Sensitivity threshold for MCS 12 is -53 dBm and for MCS 24 is -47 dBm.

There is also an MCS 0 level which is used only for the separate control channel (CPHY). MCS 0 uses “pi Over Two Differential Binary Phase Shift Keying” (π/2-DBPSK) modulation and ½ LDPC coding to achieve a relatively slow but reliable 27.5 Mbps control signaling channel. 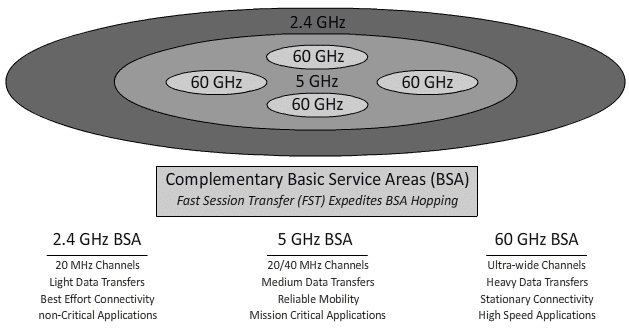 The ability to quickly and seamlessly transition from one channel to another, even in other bands is one of the top features in 802.11ad.

At this time, six manufacturers with WiGig certified products are listed on the WiFi Alliance product Finder. Power user/Gaming-grade access points are available now and several client manufacturers have included 802.11ad capabilities with their current laptop offerings. You may see these products advertised as “Tri-Band” devices. Be careful of that term, however, since some other vendor marketing programs use the term Tri-band to refer to a 2.4 GHZ radio and two 5 GHz radios. That’s not a bad thing, it’s just something to be aware of. Because of this at least one 802.11ad equipment provider has termed their equipment as “True Tri-band”. But, Enterprise-grade Tri-band APs (2.4GHz, 5 GHz, and 60 GHz radios in one box) have not yet appeared. Some dissenters have put out the comment that “most of us don’t really need these high bandwidths”. That may be true for home users, but for the enterprise, I believe that’s a little short sighted. Did you know that a single, uncompressed, 1080p HD video stream requires a 1.5 Gbps transfer rate?

That’s an “actual throughput” requirement, not a PHY rate. Today we do this by using “lossy” compression codecs that discard much of the detail that is considered expendable. In the enterprise, it’s never just about a single connection. Imagine if instead of one-way streaming we were trying to perform two-way HD videoconferencing in real-time. Of course, HD is no longer the limit. 4K HD is the current top resolution and 8K HD on the way. You can do the math. And even 8K HD is still a compromise compared to what we can actually see and hear in the real, analog world around us.

One big drawback to implementing 802.11ad, in addition to the dearth of enterprise-grade gear is the lack tools. At this time, professional toolsets for troubleshooting, propagation modeling, and signal mapping are not available. Successful integration of 802.11ad with 802.11n/ac WLANs will depend on the emergence of these applications.

802.11ad-based Wi-Fi Certified WiGig is an extremely interesting and possibly useful extension to the enterprise-grade Wi-Fi environment. 802.11ad is here now in a limited fashion. The addition of very high-speed , uncontested, ultra-wide channels, offers a safety valve to our overworked 2.4 GHz and soon-to-reach-capacity, 5 GHz-only WLANs. Although, not as good at roaming as 802.11n/ac, WiGig can offload intensive stationary and nomadic data transfer activities such as massive upload/downloads, wireless docking, wireless displays, and super-fast wireless serial connectivity. In addition, the frequency range is “green field” and available worldwide. The question for Wi-Fi professionals is whether the makers of enterprise-grade infrastructure equipment will offer the “true” Tri-band option in a cost competitive package and whether enough 802.11n/ac/ad client STAs will become available to make it worthwhile. Although it’s a good sign that the 802.11 Working Group has already started work on the next generation of 60 GHz Wi-Fi with the chartering of TGay.