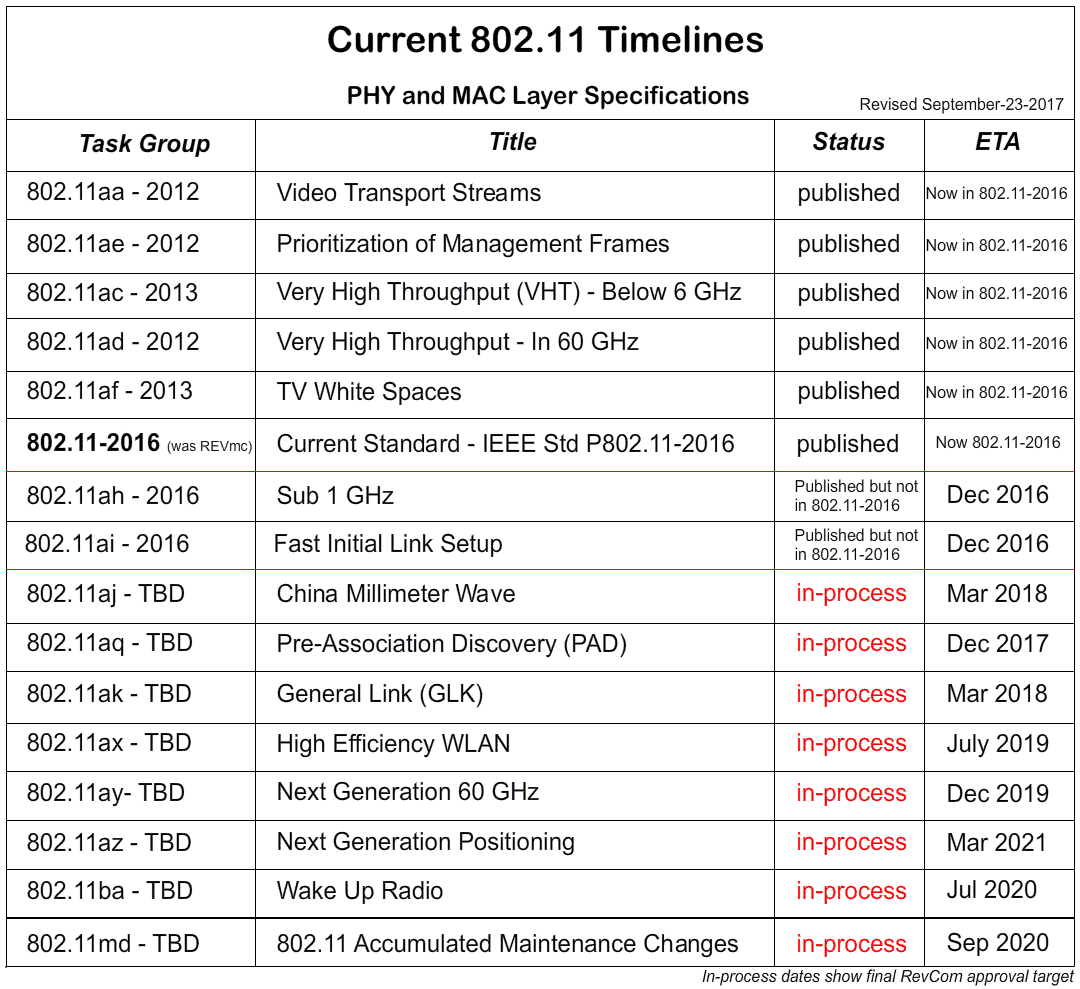 First the PHYs
802.11ac is the most anticipated improvement in this round of amendments because it adds much faster data rates to existing 5 GHz Wi-Fi through the use of 80 MHz and 160 MHz channel bonding, 256QAM modulation, standardized beam forming, and multi-user MIMO (MU-MIMO) features.  This amendment has been covered in great detail previously and as such will not be further documented in this series of articles.

802.11ad – Very High Throughput 60 GHz.
This amendment defines modifications to both the 802.11 physical layers (PHY) and the 802.11 Medium Access Control Layer (MAC) to enable operation in frequencies around 60 GHz and capable of very high throughput.  This amendment is specified for the U.S. in FCC Report and Order FCC-13-112A1_Rcd.  It has also been certified by the Wi-Fi Alliance as Wi-Fi CERTIFIED WiGig.

802.11af – TV White Spaces from 54 – 806 MHz
This amendment defines enhancements to the 802.11 PHYs and MAC to support operation in the unused TV bands white spaces.  This amendment is sanctioned in the U.S. by FCC Report and Order FCC-12-36A1.

802.11ah-2016 – Sub 1 GHz for 900 MHz ISM
This amendment defines modifications to both the IEEE 802.11 physical layer (PHY) and the medium access control (MAC) sublayer to enable operation of license-exempt 802.11 wireless networks in frequency bands below 1 GHz excluding the TV White Space bands, with a transmission range up to 1 km and a minimum data rate of at least 100 Kb/s.  In the U.S. this translates to the 900 MHz ISM frequency range and is certified by the Wi-Fi Alliance as Wi-Fi HaLow.

Since these amendments are now part of the overall standard they may have an effect on enterprise WLAN designs and deployments.  In upcoming issues we will continue to explore each of these amendments to the current 802.11 standard.  See the September, 2017 issue of the WLA Broadcast for a deeper look at 802.11ad and the Wi-Fi Alliance certification “Wi-Fi Certified WiGig”.