OFDM is simple in theory. A fast, serial data stream (your baseband user data for instance) is divided by means of a “serial-to-parallel” conversion, into multiple, slower data streams. In addition, the allocated RF channel, which in 802.11a/g is 20 MHz wide, is divided into many smaller frequency groups known as “subcarriers” (also called “bins” or “tones”) through a mathematical function known as Inverse Fast Fourier Transform (IFFT). The IFFT converts an input signal by mapping its baseband frequencies onto their representative phases and amplitudes in preparation for modulation. Next the individual subcarriers are modulated according to a pattern that assures that the peaks and nulls of adjacent transmitting subcarriers are at opposition with each other (orthogonal) which mitigates the inter-symbol interference (ISI) that normally occurs when frequencies are co-located very closely to one another. At the receiver the process is reversed and the original serial bit stream is demodulated and processed up the protocol stack. See what I mean? Simple.

The center subcarrier, called the Direct Conversion (or Direct Current) subcarrier (DC), is also inactive. The center subcarrier provides a distinctive notch which can be easily detected by a receiver, and viewed with a spectrum analyzer. This allows the receiver to quickly find the center and begin synchronization.

So how does this translate into the high transmission rates that we see with the current versions of 802.11? OFDM can generate a new symbol (composed of 48 subcarriers) every 4 microseconds. Based on that, it’s possible to signal 250,000 symbol transitions every second on each of the subcarriers.

But since only 48 of the possible 64 subcarriers are used to carry user data in 802.11a/g that means that the actual channel capacity is only equal to 12,000,000 data symbols per second.

Another way of saying, “the number of symbols per second” is to say “baud rate”, which is a well-known, if old school, telecommunications term. The term baud rate is defined as, “the number of distinct symbol changes made to the transmission medium per second” (Wikipedia). So, it is just as accurate to reword the previous lines to say that each 802.11 OFDM subcarrier has a baud rate of 250,000 baud (a.k.a., 250 megabaud). Likewise, the theoretical 802.11 OFDM channel capacity is 16,000,000 baud (aka 16 megabaud), but the maximum data transmission rate is limited to 12,000,000 baud (12 megabaud).

If you are already familiar with the dynamic rate shift levels used in 802.11a/g, and know that they can automatically adjust, according to environmental conditions, between 54, 48, 36, 24, 18, 12, 9, and 6 Megabits per second (Mbps), you may wonder, how the data rates available in 802.11a/g correlate with the baud rate. The thing to keep in mind here is that the baud rate and bit rate are NOT necessarily the same thing. Sometimes they’re equal and sometimes they’re not. The baud rate, as we have seen, is the number of possible symbol changes per second. The bit rate is determined by the type of modulation that’s being used to produce the symbol. Some types of modulation methods can represent more than one bit of information with each symbol. This is done through the creative use of phase and amplitude modifications of the transmitted symbol. The receiver has the job of matching the modulated symbol to a reference pattern in order to recognize the bit sequence that was intended by the transmitter.

Depending on the quality of the channel, 802.11a/g may select one of four types of phase modulation, namely Binary Phase Shift Keying (BPSK), Quadrature Phase Shift Keying (QPSK), 16-level Quadrature Amplitude Modulation (16QAM), and 64-level Quadrature Amplitude Modulation (64QAM). BPSK is the simplest and has the greatest propagation capabilities (meaning it can be heard and deciphered correctly for the furthest distance), but it only represents a single information bit with each symbol. BPSK is normally selected under poor channel conditions, such as if there is a lot of interference in the area or if the transmitter and receiver are a significant distance apart. BPSK is also selected for use when important information, such as broadcast announcements, are required to reach the greatest distance. When BPSK is in use, it’s correct to say that the baud rate and bit rate are equal. With any of the other modulation types used in 802.11a/g, the baud rate and bit rate are not equal, since those are able to signal more than one bit per symbol. For example, QPSK, which is used under good channel conditions, represents two information bits per baud. When channel conditions are very good, 16QAM modulation may be selected and used to represent four information bits per baud. The highest bit-rate modulation that can be used in 802.11a/g, at six bits per baud, is 64QAM. But that can only be selected when the quality of the channel is excellent. This usually means that before 64QAM would be selected for transmitting, the sender and receiver would need to be very close to each other, with very little interference in the area.

In order to picture these modulation methods, they are usually graphed on a chart using Cartesian (“x” and “y”) coordinates. The “x” axis is called the In-phase (I) axis and the “y” axis is called the Quadrature (Q) axis. For that reason these charts are typically referred to as “I & Q” charts and this family of digital, modulation techniques is frequently called “I & Q” modulation. The charts look something like a view of the night sky, with the dots that represent the ideal phase and amplitude positions looking like stars or satellites in orbit. For that reason, an image showing the locations where I & Q mapped symbols are expected to be received is called an “I & Q constellation”. When the transmitter samples a portion of the input data stream, it matches the bit desired pattern to a specific location on the I & Q chart. That location represents a combination of phase and amplitude which is then composed and signaled from the transmitting antenna. When the receiving antenna recovers this phase/amplitude signal it matches it to the I & Q chart to determine what bit pattern was meant to be represented. 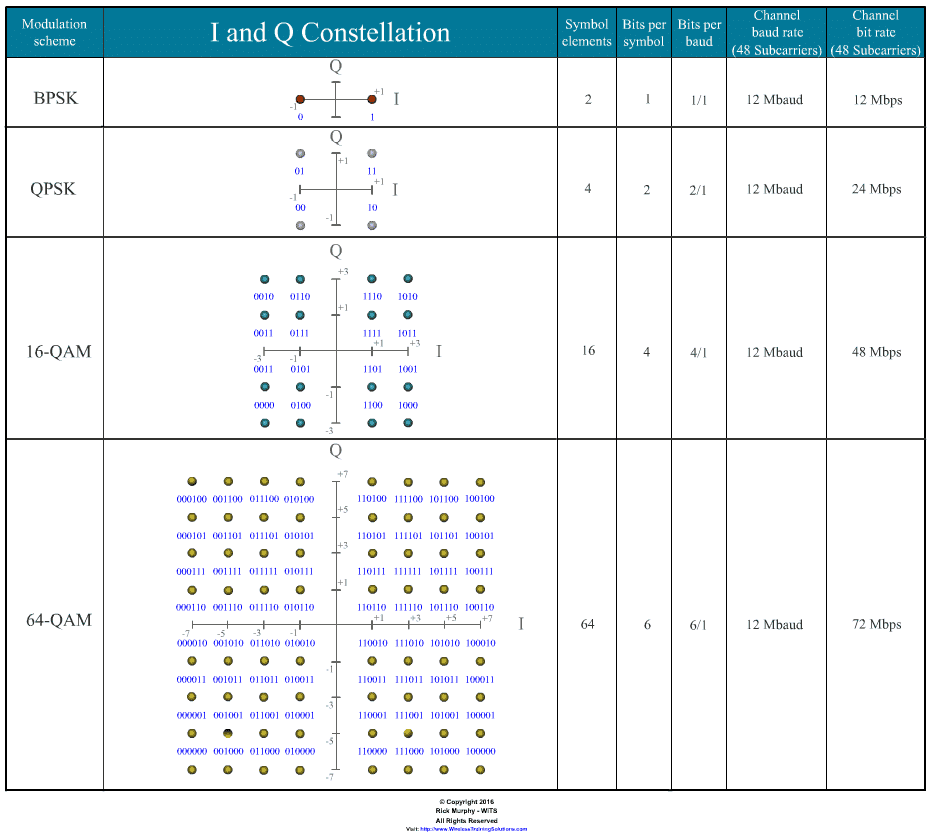 Now that we have determined the maximum baud rate of the channel as being 12 megabaud, we can calculate the maximum bit rates for the channel based on the type of modulation is use. Using BPSK (1 bit per symbol) there would be a maximum of 12 Mbps. With QPSK (2 bits per symbol) there would be a maximum of 24 Mbps. With 4 bit per symbol, 16-QAM, the maximum rises to 48 Mbps. Finally, using 64-QAM, which represents six bits of information with each symbol, the 12 megabaud channel is capable of 72 Mbps. So that’s 72, 48, 24, and 12 Mbps max channel bit rates. “What about the 54, 48, 36, 24, 18, 12, 9, and 6 Mbps data rates that we all know are the ones used by 802.11a/g”, you may ask? Well, a funny thing happens on the way to the air interface. Some of those bits per second are stolen! But in order to do that story justice we’ll discuss it in part three of this commentary.